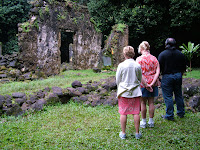 OAHU, HAWAII -- Robert Lopaka Kapanui strides across a mythological and haunted landscape populated by gods, ghosts, and demons. When he tells the tale of a Hawaiian hunter who accidentally chased a giant hog into a sacred valley, encountered a god there, and was soon after claimed by him, he is not describing an archetypal character from some vague point in a legendary past, he is talking about a cousin who met his demise just a few years ago. (Above, Kapanui prays to the resident spirits at a ruined mansion in the hills above Honolulu that once belonged to King Kamehameha III.) 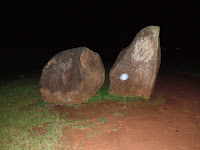 It should thus be no surprise that Kapanui is the founder of Mysteries of Honolulu, an increasingly popular tour company that explores some of the strangest and most spiritually charged -- and sometimes most frightening -- spots on the island of Oahu. (Male and female guardian stones at a temple site associated with childbearing and fertility, the former with an anomaly that some consider to be a manifestation of spiritual energy.) 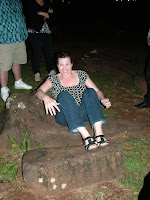 Kapanui says that he prefers skeptics to experienced ghosthunters or paranormal investigators on his tours because they come with fewer preconceived notions (something, as someone with many preconceived notions, that I understood after visiting a number of sites with him). By the time even the most incredulous have taken one of his nighttime outings, however, few are not moved at least a little closer toward a belief in the unseen world, and even fewer fail to be impressed with Kapanui's abilities as a storyteller. (Here a participant on a recent Mysteries of Honolulu tour -- appropriately, an OB/GYN -- tries out some sacred birthing stones at a temple site). 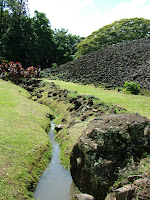 One of the sites we visited our first day out with Kapanui was Ulupo Heiau, a thousand-year-old sacrificial temple said to have been built in one night by the menehunes, a mythical race of little people similar to the fairies and dwarves of European folklore. The remains of this once massive structure are atill an impressive 30 feet tall and 140 feet wide, pointing to impressive architectural abilities. (Here is a view along the north face of the ruined temple, with a sacred boulder in the foreground. At the corner to the right is a path said to have been built by the menehunes that leads to a well.) 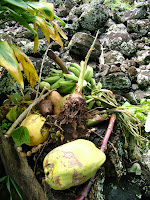 This site had many stories associated with it and a number specific areas of note within or around it, including a sacred grove where a reptile woman who seduces young men is still believed to dwell (the same sort of creature is believed to inhabit a watefall in the nearly Waimea Valley). There were also signs of active usage of this site, to include a primitive altar with bananas, papayas, and other things Kapanui said were characteristic of offerings to the god of the ocean.